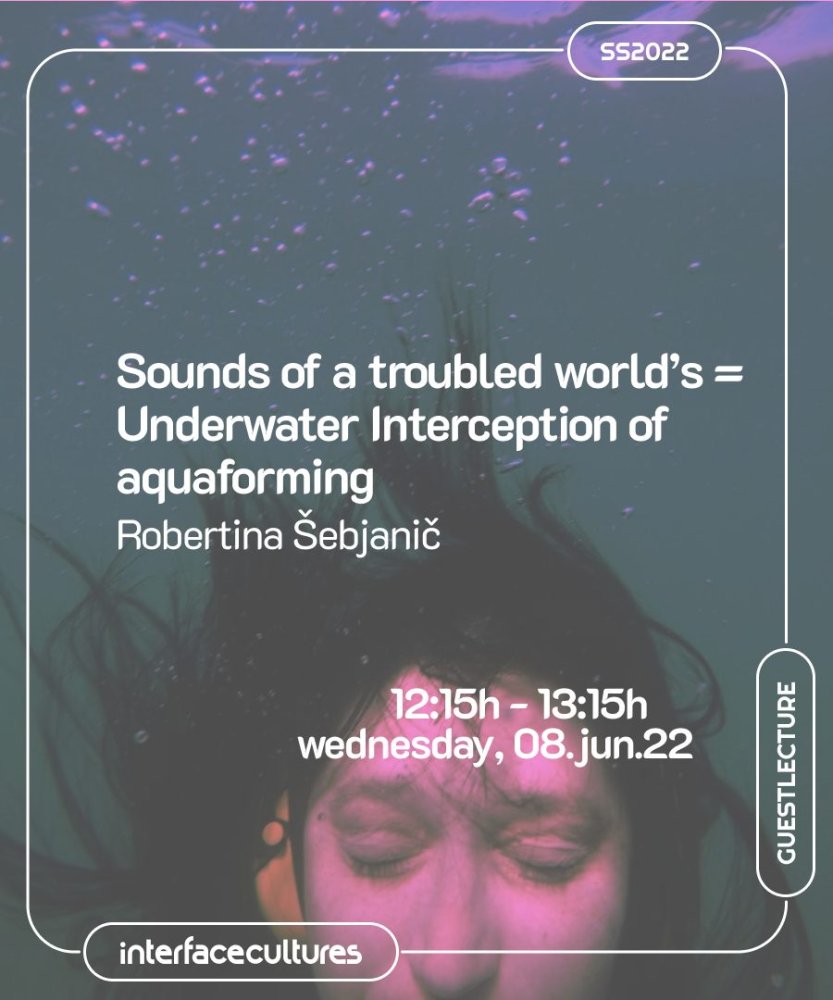 Sounds of a troubled world’s

Robertina Šebjanič will talk about her research-based art practice that is focused on the aquatic environments. Her art-sci-tech projects are often realized in collaboration with others, through interdisciplinary and informal integration in her work. She turns the results of her research into installations, performances, and music albums. In the lecture she will present about her art – scientific research, working on the field trips and how she is combining all these different inputs into artworks.

Her series of works range from working on animal-machine-human relationships, interspecies communication in opus Aurelia 1+Hz; pointing out underwater noise pollution in the worlds Oceans and seas and its ecological consequences in ongoing research work Aquatocene; illuminating the invisible anthropogenic pharmaceutical chemical pollutants – residues of human consumption with work aqua_forensic and putting the extinction of fen shell in Mediteran into the focus with A.I powered storytelling in work Aqua(I)forming.  In one of her laters work Atlantic Tales she weaves together mythologies and sciences, humans and aquatic life, to speak about our ability to address challenges in the age of the Anthropocene. The story protagonists are the migratory basking shark (Cetorhinus maximus) and the flame shell (Limaria hians), a small species, endemic to the North Atlantic waters. Robertina had the opportunity to encounter both during her residency on the RV Celtic Explorer scientific research vessel in Ireland.

Robertina Šebjanič is an internationally awarded artist, whose work revolves around the biological, geo-political and cultural realities of aquatic environments and explores humankind’s impact on other species and on the rights of more-than-human entities while calling for strategies emphatic towards other species to be adopted. In her analysis of the theoretical framework of the Anthropocene, the artist uses the term ‘aquatocene’  and ‘aquaforming’ to refer to humans’ impact on aquatic environments.