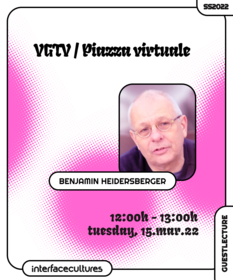 Piazza virtuale by a group of artists known as Van Gogh TV was not only the biggest art project ever to appear on television, but from a contemporary point of view the project was also a forerunner of today’s social media. The ground-breaking event that took place during the 100 days of documenta IX in 1992 was an early experiment with entirely user-created content. It was the collective work of Karel Dudesek, Benjamin Heidersberger, Mike Hentz, Salvatore Vanasco and a team of hackers, media artists and collaborators in 24 piazzettas around the world. The lecture will also briefly cover Van Gogh TV’s projects from 1989 – 1994.

Benjamin Heidersberger, born 1957, background in physics, biology, computer science (dropout). Cofounder of the artist group Head Resonance Company in Wolfsburg in 1978, of Ponton-Lab in Hamburg in 1989 and since then its director from 1994 on. Founder of Kulturserver in 2000 and of the Institut Heidersberger in 2002. Various large scale media projects (Van Gogh TV, Ars Electronica, documenta) in Europe, USA and Japan. Publications on computers, media and society as well as lectures on interactive media. Since 2010 Pentatonic Permutations, an algorithmic and time synchronous piano compostion that started 14 billion years ago with the Big Bang and will continue another 16 trillion years, tagging every moment of time. After the last permutation the piece will stop.