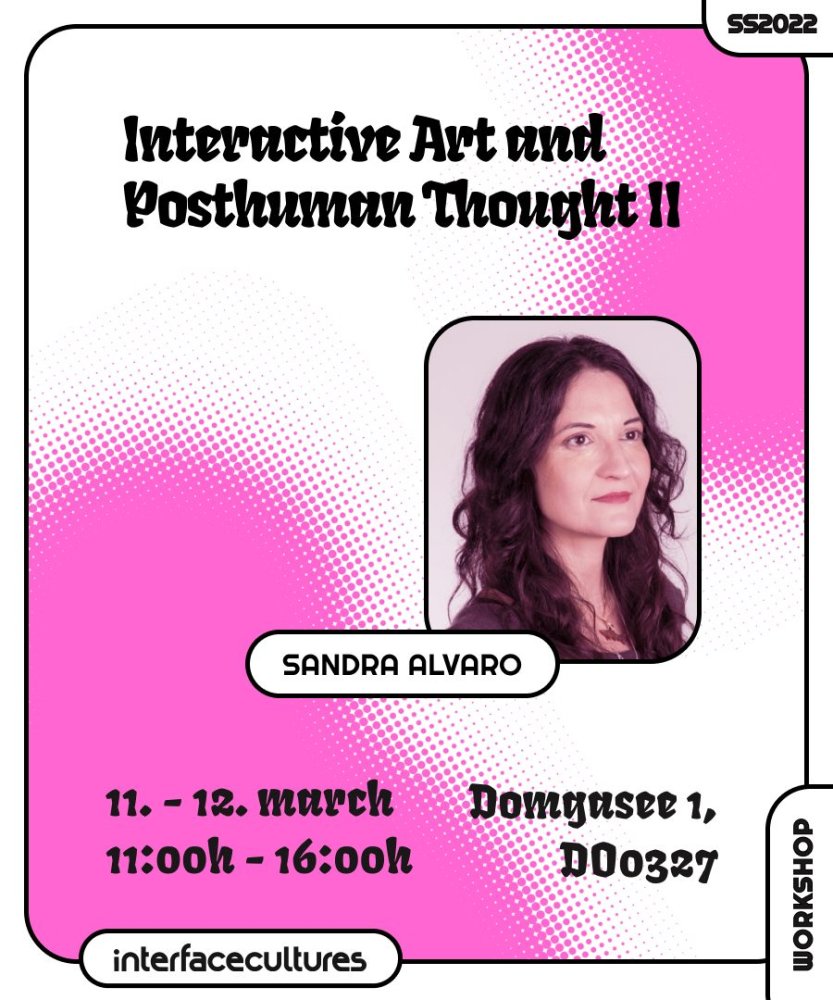 “Interactive Art and Posthuman thought” is a theoretical workshop aimed to introduce the students to the development of this current of thought and the entanglements between art science, computation and politics that accompanied its evolution.The workshop consists of two sessions, one introductory theoretical and a second practice-based in which students will discuss previously facilitated texts and propose their art examples. Participation and open discussion are welcomed in both sessions.

The Anthropocene, the role information technologies play in society and culture, and eurocentrism conform the subjects at the core of contemporary humanistic research and art practice, which addresses them in a rising number of developing projects, grouped under labels as eco-aesthetics, techno-ecology, art and science, speculative fiction, post-anthropocentrism, Postdigital, critical making, post-colonialism, and so on. These works share concepts, references, and a new relation of the human with its environment that denounces human exceptionalism and the traditional distinctions -between nature-culture, body-mind, time-space, sciences-humanities- that characterized Modern thought. The same critic and concepts are developing in the work of contemporary thinkers that under the influence of post-structuralist thinkers -notably Foucault and Deleuze – surpasses the traditional division of disciplines and consider the participation of complex entanglements between science, technology, humanities, art and politics in the production of the contemporaneous subjects and its environment.The work by Haraway, Stengers, and Latour departed from science studies to encounter with a rising number of authors in the production of a philosophical thought in which science intersects with feminism ( Donna Haraway, Isabelle Stengers, Elizabeth Grosz, Elizabeth Povinelli), digital humanities (Katherine Hayles), anthropology (Anna Lowenhaupt Tsing) Sociology (Myra J Hird), economics (Jason W. Moore ), politics (Jane Bennett), post-colonialism (Simone Bignall) and Philosophy (Claire Colebrook, Rosi Braidotti). Inside this schema of thought, art appears as a transversal, postmedial and material-based research engaged in the process of worlding and with a political and ethical function.

This workshop consists of three parts: First, the introduction to the evolution of posthuman thought focusing on the influence of science (systems theory, ecology and the theory of evolution) and interactive art. Here, we will address the bibliography and main concepts of some of the already mentioned theorists. Second, the analysis and discussion of posthumanist texts related to interactive artworks. Here, we will highlight the concepts and functions attributed to art and its relationship with Deleuze’s art definition. Third, we will comment and discuss texts – from other fields than philosophy -, which had contributed to the development of the concepts and practices previously analyzed.
The bibliography and materials for this workshop will be provided in advance in this link:
www.enlaciutat.es/InteractiveArt_Posthumanism/